The first time I saw Stratford-upon-Avon was the summer of 2004. I had just completed my high school diploma. I was eighteen with a new world stretching out before me. I stepped off the bus in front of the Legacy Falcon Hotel and peered down Chapel Lane at the home of the Royal Shakespeare Company. I remember thinking in that moment, “I could live here.” Little did I know that 7 years later I would have that very opportunity, as I nurtured my love affair with The Bard of Avon.

Stratford-upon-Avon is a vibrant market town with a recorded history of over a thousand years. The original charters of the town were granted in 1196, making Stratford officially over 800 years old. The peaceful panorama of the English countryside along the Avon never fails to amaze. The river’s calm waters signify the wealth of this charming town, bringing in commerce from the early days of Saxon settlers. Today, little boats and swans populate the waters and fisherman can often be seen along the river bank. Yet, the popularity and world fame of this town cannot solely be attributed to the beauty of the Avon or its diverse history spanning back to the Romans who crossed the Avon river ford on Streat, lending it the name of Stratford. 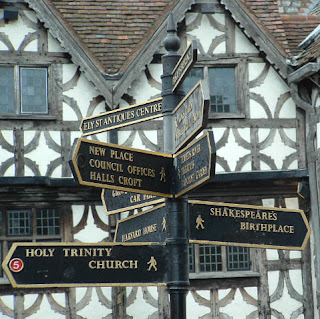 Indeed, the most impressive piece of fame derives from a man named William Shakespeare, the world’s pre-eminent dramatist, who was born and died in Stratford-upon-Avon. As William Dugdale reminds us in his 1656 writings, “one thing more, in reference to this ancient Town is observable, that it gave birth and sepulture to our late famous Will. Shakespeare”. Everywhere you look, one can observe history in the making; From the spire of Holy Trinity Church (site where William Shakespeare was baptized in 1564 and buried in 1616), to the stone Bridge of Clopton and beyond.

To behold the history of Stratford first hand is to be closer to Shakespeare. As Joseph Hunter wrote in 1824, “we meet with Shakespeare everywhere”.

And so I found myself calling this town home during my journey through grad school; And what better place to live and breathe Shakespeare?

"Suit the action to the word, the word to the action, with this special observance, that you o'erstep not the modesty of nature: for any thing so o'erdone is from the purpose of playing, whose end, both at the first and now, was and is, to hold as 'twere the mirror up to nature: to show virtue her feature, scorn her own image, and the very age and body of the time his form and pressure." - William Shakespeare (Hamlet 3.2.17-24)

Want to know more about me? Visit my website. It will keep you up to date on all my projects, production photos, happenings and press: The Official Webiste of Jamie Sowers.