I got my dose of theatre for the weekend.  My flatmate (Jude) and I went into London on Saturday just for an overnight trip. We took the train there from Stratford. It was a nice ride through the country.

When we arrived we dropped out bags off at a local hostel - Then went into central London to grab some last minute theatre tickets. 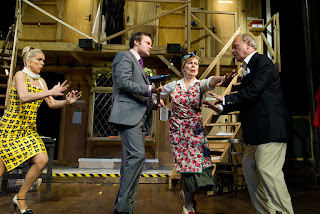 First we saw Noises Off at the Old Vic - A rather fun afternoon show. Our seats were terrible as we bought limited viewing seats for only 10 quid. We could only see about half of the stage and we had to stand through the performance in order to see that much. In a sitting position we were only able to see down stage left - A tragedy, since the second act relies so heavily on physical comedy. Luckily, I am very familiar with the play, centering around several inept actors and a director struggling to put on a production of a terribly written play, while triangulating relationships progress into farcical situations. 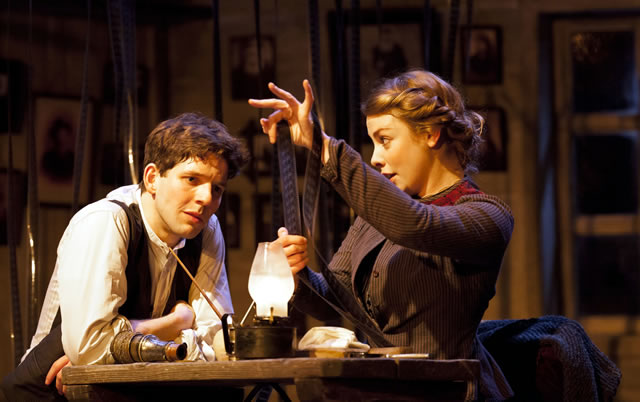 In the evening we were blessed to see Travelling Light at the National Theatre. The play, featuring Anthony Sher, was truly imaginative and visually spectacular. The play, directed by Nicholas Hytner, tells the story of a famous Hollywood director of the 1930s and 40s who looks back at his youth in an east European shtetl. Through the art of "moving pictures" the young man experiences love, loss, and struggles to find his identity. I found the performance very moving.

After the performance we checked into the hostel. Our room smelled like feet and contained 3 snorers of epic proportions. We did not get any sleep, and were glad to depart the next morning. We took the train back from London, but one of our trains was canceled, so we spent the last hour of our journey on a bus.

I am glad to be home, but miss the big city. I hope to make a longer trip to London later next month.
Posted by Jamie Sowers at 10:53 AM No comments:

Tonight I attended the premiere of Coriolanus at the Stratford Picture House. The showing followed with a discussion with Paul Prescott and Paul Edmondson in connection with the Shakespeare Birthplace Trust.

I am very impressed with the film. Ralph Fiennes directs and portrays the title character. Fiennes command of the language is astonishing. He plays the role larger then life, almost too large for the screen, but not quite. I think it is probably the best Shakespeare performance I have seen on the film. His direction brings the play into a modern context, where war rages in "a place like ROME" - A location which represents current events in many part of the world today. I think this is a film that non-Shakesepare buffs will enjoys as much as Shakespeare lovers.

Paul Edmondson blogged on the event at Blogging Shakespeare. The audio commentary between the two Pauls at the bottom of Edmondson's blog entry is very interesting and worth having a listen. Please find the movie trailer below.

Posted by Jamie Sowers at 3:55 PM No comments:

I will be playing Hulacus in a staged reading of Fuimus Troes (The True Trojans) written by Jasper Fisher. The reading will be the first performance of the play in its original space since 1618, at Magdalen College in Oxford. On Monday March 19th, the reading will begin at 9:30am, followed by a academic discussion of the work. The panel discussion following the reading will be made up of Dr. Marion Turner, Prof. Laurie Maguire, Prof. Katherine Duncan-Jones, Dr. Sarah Knight, Dr. Elisabeth, Dutton, and Dr. James McBain. More information to follow!
Posted by Jamie Sowers at 11:16 AM No comments: 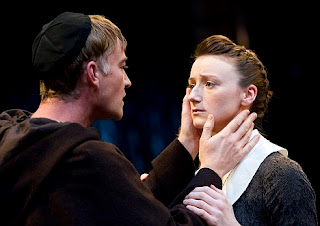 Tonight's performance of the RSC's Measure for Measure at the Swan highlighted the greatness of Shakespeare's lesser known and appreciated masterpiece. The moralizing quality of the play showed through in the performance of Jodie McNee as Isabella. With her Northern English accent, this actress stepped into the spotlight bringing heart and intelligence to her role.

Another noteworthy performance of the night, Joseph Kloska as Pompey delighted the audience will as a comic deviant of posh society.

The only flaw resided in the lack-luster use of bondage, leather and whips between scenes. A conceptual addition that did not seem to take shape, shock or be anything other than a peculiar irregularity.

Raymond Coulthard as the Duke seems likable at times, though not aggressive enough in his desires to attain Isabella's heart. His literal magic act, producing letters out of thin air, became a gimmick that distracted from more then it aided to the interpretation of his role. Similarly, Jamie Ballard as Angelo was neither detestable nor likeable - sexually desiring the novice, Isabella, but not taking steps to ensure her recoil from him - in short he was not scary or cruel enough.

All was made better in the end with the ambiguous ending surmounting in Isabella's choice. The hesitant Isabella did not make her choice with ease, but took the time to contemplate her decision, even changing her mind in the final moments of the play. But the ending will not be revealed here, for every able person to get down to the theatre to see this one for themselves.
Posted by Jamie Sowers at 3:33 PM No comments:

I am proud to announce my involvement in the Ketterer’s Men production of W.S. Gilbert’s Rosencrantz and Guildenstern. I will be putting on my manly tights once again as Guildenstern in this one-time benefit performance. I am excited to raise money for the Lizz Ketterer Trust and hope to see all of the Shakespeare Institute Family at the show on February 11th at 7:30pm.
Posted by Jamie Sowers at 11:17 AM No comments:

Today is my 26th birthday. This is my second birthday in England. I also celebrated my 21st in London with Chapman University's London Theatre tour. Apparently the university students are somewhere in London even now as I write this blog.

Although it is a pretty uneventful day, I am glad to be back in my flat and eager to start the next term. Even though I have many papers to write this month, I took the time to celebrate my birthday with a few close friends at the Dirty Duck.

I am missing home a little bit today. Mostly I miss Mom and Dad. It is tough to be out of the country sometimes, but at the same time I am having the time of my life. It's a bitter sweet birthday when I think about it. This pint is for you Mom and Dad - Thanks for bringing me into the world so I can study Shakespeare. Cheers!
Posted by Jamie Sowers at 3:29 PM No comments:

Email ThisBlogThis!Share to TwitterShare to FacebookShare to Pinterest
Labels: Dirty Duck, My Thoughts

I just arrived back at my flat after a 9.5 hour plane flight (which was fast by the way because of a tail wind), a 1.5 hour bus ride, and a 20 minute taxi ride. Luckily my grocery delivery showed up at about the same time, so I came home to a fully stocked cupboard. Unluckily, we had a slight power outage. However, I now know where the circuit box is and was able to correct this before our cold food spoiled. Unluckily again, it looks like our water heater isn’t working. The red light is on (not a good thing according to the label on the side panel). So all baths until Monday will take place in the tub with my kettle. Yuck!

In other news, I had a great 3 weeks at home with my family, despite a case of the chickenpox! Yikes! And for those of you who are curious, yes I had it when I was little. It was just another case of bad luck I guess. LOL.

I was able to celebrate my best friend's 25th birthday. I was able to see a few of my good friends and ate all kinds of delicious American food to my hearts content. Now that I am back, I am going to rest for the next 2 days - with the exception of having some drinks with friends tomorrow night for my 26th birthday. Then I need to focus my efforts on completing my 3 terms papers due this month. Yikes, again! I better start writing!
Posted by Jamie Sowers at 4:46 PM No comments: 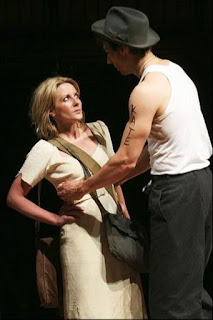 The Taming of the Shrew directed by Lucy Bailey at the Royal Shakespeare Theatre in Stratford-upon-Avon is a loud, grotesque and unromantic view of one of Shakespeare’s greatest plays. However, under the circumstances, the productions odd choices seemed to create a magic, yet undignified world, in which the characters seemed more striking than ever.
The stage, or rather a giant bed, covered with an enormous sheet, produces a playful and sensual environment. The actors hide beneath the sheets, chaise each other under the cover, partake in pillow fights and roll around in unexpected ways. David Caves and Lisa Dillon triumph as Petruchio and Kate. Their chemistry brightens the darkness of their savageness.
In the end, although Kate becomes love stuck with her Petruchio, she is truly tamed – still claiming possession of her wild spirit. Her final speech produces touching emotions rather than the startling comic gestures often misinterpreted by many productions.
Posted by Jamie Sowers at 11:36 AM No comments:

"Suit the action to the word, the word to the action, with this special observance, that you o'erstep not the modesty of nature: for any thing so o'erdone is from the purpose of playing, whose end, both at the first and now, was and is, to hold as 'twere the mirror up to nature: to show virtue her feature, scorn her own image, and the very age and body of the time his form and pressure." - William Shakespeare (Hamlet 3.2.17-24)

Want to know more about me? Visit my website. It will keep you up to date on all my projects, production photos, happenings and press: The Official Webiste of Jamie Sowers.